Venison exporters, confident in the outlook for next year, are mindful of the need to lift farmgate prices as they negotiate 2023 sales contracts.

DINZ CEO Innes Moffat is heartened with the steady improvement marketers have achieved in lifting venison prices and the positive sentiment being expressed about 2023 demand. Continued improvements in prices are needed.

“Costs are up and we need our marketers to continue to deliver improved returns for the investments farmers are making to meet compliance costs. We have been through a tough Covid, the work the companies have done to diversify markets and channels is now coming to fruition, we need to extract maximum value from demand for naturally raised meats to ensure venison is a profitable land use option.” 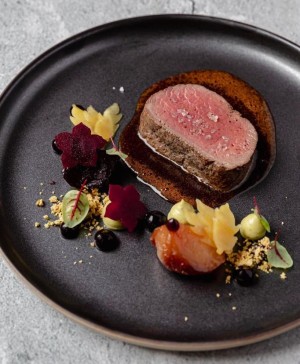 One of German chef Julia Komp’s dishes served up at the New Zealand Embassy event in Germany in September.

Venison marketers  are reporting solid demand in Europe during the ‘game season’   against a backdrop of a reset for the global protein market, which has seen prices for some lamb cuts  dropping by around 25 percent.

Strong venison sales are “ a pretty good signal,” comments an “always confident” John Sadler of Mountain River Venison, who sees a good 2023 outlook with no particular risk ahead.

First Light Foods general manager venison Matt Gibson expressed satisfaction with the prices they have received from European customers too, given the market challenges.

With the enormous disruption in Europe due to the energy shock, shipping constraints and the war in Ukraine the fact marketers have been able to pay chilled contracts between $9.30-9.60/kg and that these have not dropped back as they usually would do “is a pretty good result for the sector, considering the various head winds,” he notes.

The schedule today reflects sales across diverse markets, as well as Europe Gibson notes, with exporters having diversified their markets to the US, China and elsewhere.

“That diversification is why we’re managing to deliver a schedule which has only dropped by 40-50 cents since the end of the season.”

For Silver Fern Farms general manager sales and marketing Dave Courtney, it is a positive the sector no longer relies so heavily on the EU foodservice trade for its return.

“Our focus in 2023 is continuing to implement our strategy of diversifying demand for venison across markets, channels and products,” he says.

The work done since the dramatic fall in the venison schedule to diversify markets and channels for venison globally has built a solid base of venison demand, “which is key to having a sustainable venison schedule in the long-run”, he says.

A material lift in the schedule will rely in part – although not as much as it used to – on foodservice demand in the EU however, Courtney believes.

“Venison is less exposed to the belt tightening than other red meats as it’s predominantly a restaurant item and folks who can eat out are less inclined to go bargain hunting on a restaurant menu,” comments Duncan NZ marketing manager Chris Duncan. Others agree, including Alliance and First Light.

Duncan NZ has been experiencing steady demand for its products, he reports, attributing that to the recovering foodservice market and “a general shortage of wild game in Europe”.

Now the game season’s chilled product has mostly moved through the system, sales departments are busy with negotiations for the 2023 programmes. Recent market visits have put them face-to-face with customers. All are looking at good demand, in a range of markets, with stable prices going into 2023.

A balanced portfolio is the aim for Alliance Group, which had a “solid” game season, reporting foodservice items such as striploins, tenderloins and racks were in high demand. It has confirmed a “not insignificant” contract with China, is active in the UK home delivery sector and is also working on new initiatives in North America. Its European buyers will be making their first visits to New Zealand since 2019 in the New Year.

He attributes that and the general shortage of wild game in Europe to the steady demand they have experienced. Duncan NZ is also aiming for further growth in North America next year.

“We are also pleased to see global logistics improving, enabling us to minimise costly airfreight shipments. We are also seeing some positive trends in consumer buying behaviour which put venison in a favourable position, relative to previous years,” he says.

As the sector heads into the New Year, exporters will be getting “a better gauge on market signals from the second half of the season,”  and what this means for the venison schedule, Duncan says.

First Light managing director Gerard Hickey agrees, noting that with sales negotiations currently underway, companies would be reluctant to share their predictions for the 2023 farmgate prices.

“However, everyone is mindful of where venison needs to be to ensure competitive land use, which is north of $10 per kg,” he says.