A rare drought in Southland and South Otago means deer farmers there are currently feeling the dry. 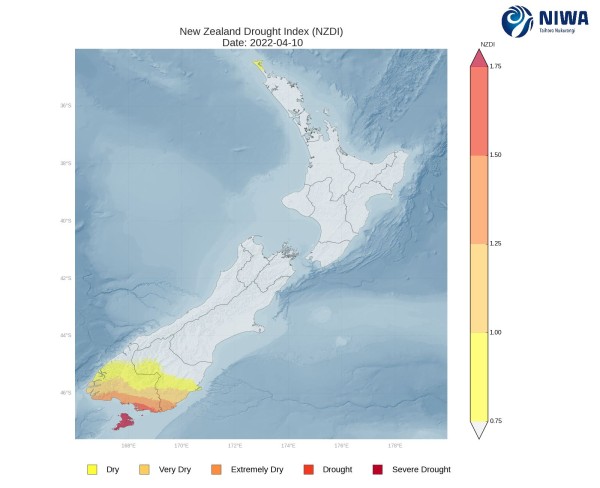 Despite the arrival of 40-70mm of “useful” rain in the past two weeks most deer farmers in the region – which has helped – it was not enough, says NZDFA Southland branch chair Bruce Allan.

Most farms in Southland rely on good autumn pasture covers going into a winter which can be up to 100 days of minimum growth, he explains.

Rainfall on the south coast has been the lowest since records began 50 years ago and some rivers were at levels only seen every 80 years. The unusual lack of rain, since the start of the year, caused irrigation to be stopped throughout the whole of the region at the end of March for two weeks, when a medium-scale adverse event was announced by Minister of Agriculture Damien O’Connor.

Allan says “It’s testing times. The challenge for most people is that pasture cover is low and in some parts of the province winter feed reserves have been eaten into. The window of opportunity to get some growth before winter is relatively small.”

Those with mixed enterprises may have added strain with the current pandemic disruption to meat processing, even though the peak killing season has passed for deer.

While everyone’s situation will be different, Allan notes, deer farmers in Southland and South Otago will need to proactively look after themselves and seek extra feed if required.

The government’s announcement unlocked up to $100,000 in government funding for Southland and Otago Rural Support Trusts to support farmers and growers, who are struggling, and activated the National Feed Coordination Service through to October 2022. It will also help with one-on-one support and community events, with extra technical advice also available from industry groups, including feed planning advice.

“The $100,000 is a start but more will be needed,” says NZDFA chair John Somerville, noting supplementary feed is scarce and very expensive at the moment.