P2P springboard to much bigger industry


Minister of Agriculture, the Hon Damien O’Connor, has challenged the deer industry to grow to become a billion-dollar industry. He was speaking at an event held at Parliament last week to celebrate the success of the Passion2Profit (P2P) programme, which has just concluded. Over 60 gathered to mark the milestone.

P2P aimed to convert the passion that farmers have for their deer into greater farm profitability. Seven years and $14 million later it has resulted in the development of major new markets for venison and greater productivity on deer farms.

China is now the industry’s fourth biggest venison market, up from near zero exports at the start of the P2P programme. At retail in the United States, venison sales are growing faster than any other protein item – again up from near-zero seven years ago.

On farm, productivity improvement has been reflected in a four percent increase in national fawn survival rates, and a four kg lift in average carcase weights from 55 kg to 59 kg.

P2P was part of government’s Primary Growth Partnership programme and was funded 50/50 by the Ministry for Primary Industries (MPI) and DINZ, working in partnership with the five venison marketing companies. 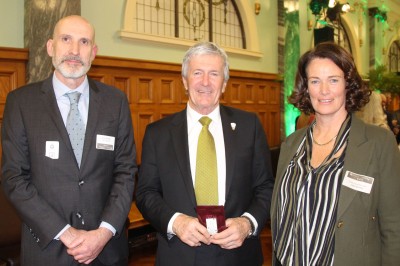 Minister of Agriculture, Hon Damien O’Connor was celebrating the start of the next phase for the deer industry in his speech to the assembled crowd. That included MPs, venison marketers, DFA executive, staff who had been involved in the programme, and media, among others.

He congratulated the sector for concluding the programme, along with the continued commitment of all the participants, including MPI.

Noting, during his tours of New Zealand, all the spaces better suited to deer that are currently occupied by beef … or alpacas … O’Connor sees great potential for the sector to “grow the numbers, without additional costs and investment in infrastructure,” he said. “Building those numbers is important.”

Moving up the value chain from the current $161 million should be a target, he said. “We should be able to grow that to $1 billion dollars.”

International consumers are more discerning, have more options and their behaviour is changing because of climate change. He acknowledged some farmers are not comfortable with the change government is hoping to make around water quality, emissions reduction and biosecurity.

“But, believe me if we can move through that, as we did in the ‘80s, to shift our farming systems into a more profitable and efficient place and take on board those international obligations, then the world’s our oyster,” he said.

“We’ve come out of P2P motivated and engaged”

Thanking the Minister and MPI for their support, DINZ chair Mandy Bell noted at the P2P celebration: “We’ve come out of P2P motivated and engaged. We’re small, we’re agile and we’re integrated,” she said, adding the venison and velvet companies, as well as the DFA were all “sitting at the table.”

Bell talked about the “robust conversations” that had been had around the formation of the programme by the core P2P Advisory Group comprising herself, former DINZ chair Andy Macfarlane and deer farmers Paddy Boyd and Gavin Sheath. 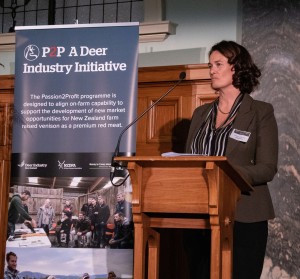 “We looked forward 20 years and worked from the market back to the land and agreed on what was needed to grow the markets and support farmers to align closely with this.”

The Advance Party programme had been the most successful initiative for Bell, with around a third of deer farmers taking part in a group or one of the Deer Industry Environment Groups, “which use the same method of farmer-centric facilitated small group training.

“With P2P completed we’re continuing to push on, exploring other methods of engaging with farmers, recognising that groups don’t work for everyone and farmers, busy with their farm businesses and all the challenges of today, don’t feel they can afford the time off farm.”

DINZ thanks DINZ staff, contractors, facilitators, members of the theme groups and the P2P Advisory Group and Marketing Working Group for their passion and dedication to the work of the programme.

To read the media release circulated to mark the completion of P2P, click here >>