Europe is open for venison business again. Sales personnel are just returning from their first market visits for a couple of years.

Duncan NZ executive chairman Andy Duncan reports he found Europe “open and folks are getting on with business, despite the challenges of staffing and logistics issues.” 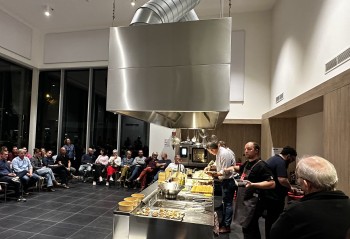 Shannon Campbell DINZ’ part-time chef based in Germany has been hard at work extolling the virtues of New Zealand venison to consumers and customers, like this demonstration at a Belgian meat wholesaler.

Cost of living increases are being “felt at the supermarket shelf,” where there is less income to go around as a result of the Ukraine war, rising energy and interest rates, he noted.

However, Duncan reported “positivity amongst our customer group” and concluded from their various meetings with customers that, overall, New Zealand venison has an optimistic outlook in the region.

Targeting foodservice has slightly insulated venison sales from the “retail belt tightening,” he says. Now that restaurants are open again, “Those who can dine out are, and are less inclined to ‘bargain hunt’ on a menu.”

Game items are shorter supply too, with swine flu affecting some wild boar recovery, he found.

Shipping issues are easing and plenty of marketing work has been underway in Europe, by both DINZ and the venison companies.

“While there are some concerns for venison around the economic downturn, we will still continue to promote and push with our in-market partners as hard as we can to support our venison products,” Silver Fern Farms general manager sales Peter Robinson told deer farming leaders at the DFA branch chairs meeting last month before he headed off to the market and the SIAL trade fair in Paris.

All exporters have reported volume sales are positive, with prices up on last year, he noted. “It’s a good recovery for chilled,” he said, though frozen sales were slower – as usual, for the time of year.”

This is reflected in the current published farm-gate prices for AP stags, of between $8.85-$8.95/kg, around a third higher than the national average for last year, and three to five percent above the five-year average.